Horror movies from tame to terrorizing that are screening around Pittsburgh

It's officially Halloween season, and in addition to acting spooky and eating too much candy, it's a great time of year to dig into weird, scary, and haunting movies, from bone-chilling horror movies to family-friendly classics. There are a plethora of spooky movies playing across town (too many for this list) throughout the month, so we've compiled some of the best, divided into categories ranked by fear level and grotesqueness. Visit theater websites for complete lineups, or checkout Pittsburgh City Paper's weekly film roundup every Friday on pghcitypaper.com.

What We Do in the Shadows

This horror/comedy/mockumentary directed by and starring Jemaine Clement and Taika Waititi follows a group of vampire roommates as they navigate chores and rent, as well as their thirst for blood in the modern world. 12 a.m. Sat., Oct. 12. Manor Theater, 1729 Murray Ave., Squirrel Hill. $8-9.75. manorpgh.com

A teen boy accidentally resurrects three witches in Salem, Mass., (Bette Midler, Sarah Jessica Parker, Kathy Najimy) who were hanged in 1693, because of a curse that would bring them back to life if a virgin lit a black candle. There's also a black cat named Thackery Binx. What more could you want? Various times. Oct. 18-31. Row House Cinema, 4115 Butler St., Lawrenceville. $7-10. rowhousecinema.com 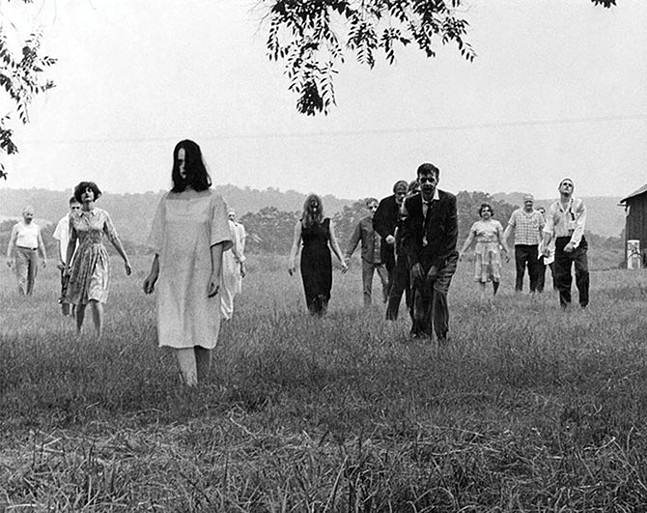 Night of the Living Dead

Will make you sleep with the light on

Night of the Living Dead

Apparently, this movie is kind of a big deal? By some guy named George Romero? It follows a group of people barricaded in a Southwestern Pennsylvania farmhouse as a horde of undead try to consume the living. Sounds like it might be a hit! 7 p.m. Fri., Oct. 11. Regent Square Theater, 1035 Braddock Ave., Regent Square. $10. cinema.pfpca.org

The villain in Phantasm is a very tall undertaker. There are also a bunch of flying metal spheres with sharp blades that hook themselves into its victims' forehead. The cult film was first released in 1979, followed by four more films, the last of which came out in 2016. 12 a.m. Sat., Oct. 19. Manor Theater, 1729 Murray Ave., Squirrel Hill. $8-9.75. manorpgh.com

The 1978 John Carpenter classic follows the terror inflicted by Michael Myers, a young man who was locked away as a kid for stabbing his sister to death. Now he's back to stab (and strangle) even more people. 12 a.m. Sat., Oct. 26. Manor Theater, 1729 Murray Ave., Squirrel Hill. $8-9.75. manorpgh.com

Oh god, please no, no, god why

Even the biggest George Romero fans haven't seen this film, because it's only been seen by a few people, until now. Romero was commissioned to make the piece as a PSA about ageism and caring for the elderly, set in a theme park. It was too scary to use and was never released. Some who have seen it have described it as the director's most horrifying film. 8 p.m. Fri., Oct. 12. Regent Square Theater, 1035 Braddock Ave., Regent Square. $10. cinema.pfpca.org

After the traumatic death of her husband and daughter, a woman goes on a caving expedition with her friends to take her mind off things. The trip does take her mind off things, but only because the group gets stuck in a cave from which there is no escape, and is filled with blood, bodies, and nasty underground creatures. Various times. Oct. 18-25. Row House Cinema, 4115 Butler St., Lawrenceville. $7-10. rowhousecinema.com

A 19th-century ghost and son of a slave now haunts Chicago as a terrifying urban legend by the name of Candyman. When a white grad student begins writing a thesis on urban legends, Candyman retaliates by framing her for a series of hideous murders. Various times. Mon., Oct. 21 and Oct. 25-31. Row House Cinema, 4115 Butler St., Lawrenceville. $7-10. rowhousecinema.com