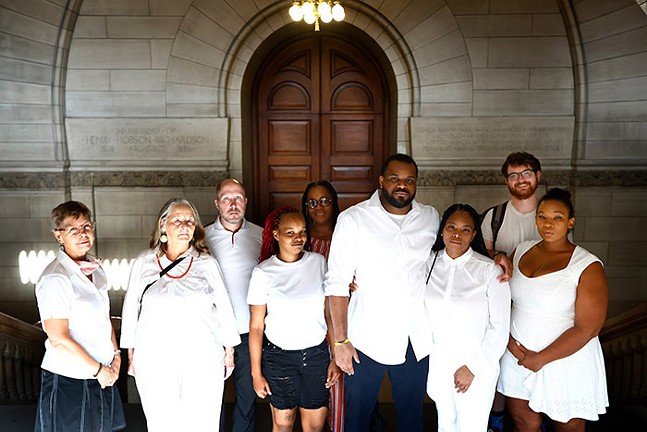 Volunteer court watchers dressed in white filed into Judge Anthony Mariani's common pleas courtroom this morning in protest of his conduct toward defendants.


The demonstration was coordinated by staff from the Abolitionist Law Center and the family of Gerald Thomas who died earlier this year aged 26 after collapsing in Allegheny County Jail. Both have independently filed complaints against Mariani, one of which accuses the judge of “impatient, undignified, and discourteous behavior” towards defendants.

Thomas spent about a year in jail waiting for a hearing in front of Mariani on an alleged probation violation. At the February 2022 hearing, Saunders says, Mariani was “rude, arrogant, and racist,” and made numerous assumptions about her son’s behavior without allowing him to speak for himself. During that hearing, Mariani sent Thomas back to jail, despite the prosecutors dropping all charges against him. Thomas died in ACJ custody less than a month later.

In the aftermath of her son's death, Saunders filed a formal complaint against Mariani with the Judicial Conduct Board of Pennsylvania requesting an investigation. She says she returned to Mariani's courtroom today to see if anything has changed.

“I decided to come out today, specifically because he was doing [probation] violation hearings today,” Saunders tells Pittsburgh City Paper. “Because that’s the last time I seen my son was at his violation hearing. I wanted to see what’s going on with [Mariani] right now, his demeanor, and how he’s treating other people.”

Last month, the Abolitionist Law Center filed 62 complaints against Mariani based on more than a year of observation by volunteer court watchers. The complaints allege that Mariani’s behavior towards Thomas is part of a larger pattern of bias against certain kinds of defendants, including Black men.

The volunteers attribute their presence in the courtroom to the changes they claimed to see in Mariani's behavior today.

“We all were very effective,” Saunders says. “I feel like if we would do this more often, then he would maybe get in line until he’s off the bench.”

Mariani’s office did not respond to a request for comment.

6 Mason Rudolph: The Most Hated Man within the Pittsburgh...