Worshipers raise their hands during a community prayer vigil for racial justice and reconciliation at the Eastminster Presbyterian Church on May 31, 2020.

On Sunday evening, a few hundred people gathered behind Eastminster Presbyterian Church during a community prayer vigil for racial justice and reconciliation.

The event took place in the wake of protests in Pittsburgh and other U.S. cities incited by the death of George Floyd, an unarmed Black man in Minnesota, in the custody of white police officers. In the shadow of the church, several of the city's religious leaders led prayers and gave stirring speeches asking for all people to come together to combat racism, injustice, and economic disparity.


Reverend Nicole Porter of Eastminster sang a gospel piece by Thomas A. Dorsey, while others called for community action, moments of silence, or prayers for the family of Floyd, as well as for the families of other Black American men who have been killed by white law enforcement since 2018.

The crowd spilled onto Aldino Street and the adjoining parking lot, while some watched from a distance on nearby rooftops. Most worshipers wore masks in line with CDC guidelines to prevent the spread COVID-19. Many people bumped elbows in greeting to avoid shaking hands.


“I can say that our church parking lot has never looked so beautiful,” said Pastor Paul Roberts from Eastminster as he looked into the crowd. He then pleaded for white Americans to do more to stop the suffering of Black Americans and end 400 years of their “being enslaved, murdered, lynched, and ethnically intimidated.”


He cited the fear he, as a white clergy member, sees in his own Black parishioners and called out the need for justice in the case of Floyd. He also cited the cases of Antwon Rose II, a local Black teenager who was fatally shot in June 2018 by former East Pittsburgh police officer Michael Rosfeld, and Ahmaud Arbery, a 25-year-old Black man in Georgia who was chased down and killed in February by two men claiming to be making a citizen's arrest.


The death and subsequent trial surrounding Rose's death resulted in protests last year when Rosfeld was acquitted. The two men involved in Arbery's death, Gregory McMichael and his son, Travis McMichael, were charged with murder and aggravated assault.

Even with their faces obscured by masks, it was clear many in the crowd were moved to tears, with some lifting their glasses to wipe their eyes.


“We're the problem, white America's the problem!” Roberts yelled into the microphone. “We're the one's sick, our churches are sick. We're sick, we're dying, and we need to repent.” 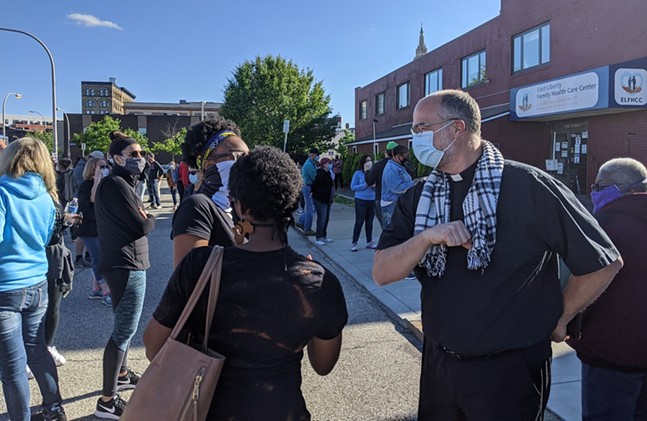 This sentiment was echoed by other local white church leaders in attendance, including Jonathan Cordle, one of the event organizers and senior pastor of East Liberty campus of Crossroads Church, and Dr. Randall Bush, senior pastor at the East Liberty Presbyterian Church, who called on white Americans to recognize how they benefit from their privilege.

It was also expressed by Pittsburgh Mayor Bill Peduto who said, “We have to utilize this moment for good we need to find that way as the pastor said to bring together all sides. And we — and I'm talking to you white people — have to stand up for our neighbors, our brothers and sisters who have been the object of discrimination.”


Bishop Loren Mann of Pentecostal Temple Church Of God In Christ detailed Floyd's death, which has been compared to the 2014 death of Eric Garner, another unarmed Black man who was filmed repeatedly yelling "I can't breathe" as a New York police officer held him in a chokehold. On May 25, Floyd was handcuffed and forced onto the ground, where Derek Chauvin, a white Minneapolis police officer, kept his knee on Floyd's neck for nearly nine minutes.


As with many past cases, footage of Floyd's death was shared online and soon went viral. All four officers involved in the incident have been fired, and it was announced that Chauvin was formerly charged with third-degree murder and second-degree manslaughter.

“He was actually murdered,” said Mann. “And we've all watched this very, very publicly and it affects every one of us. What affects one, affects all of us.”


Some speakers also discouraged anti-police rhetoric, which conflicts with the “All Cops Are Bad” messaging on social media in response to footage of police using what many view as excessive force against crowds of protesters, including shooting rubber bullets and tear gas.


In an especially jarring moment, a police officer on the scene volunteered to come forward and, after pulling down his face mask, addressed the crowd, saying, “as a representative of the Pittsburgh Bureau of Police, if myself or any other officer did anything that hurt, I ask for your forgiveness.”


Deviating from the religious messaging was Peduto, who promised arrests of what he views as outside agitators who tainted the Downtown protest, which was organized by Black community groups. As reported by the Pittsburgh City Paper and other outlets, the march took a turn when two police cruisers were vandalized and set ablaze outside PPG Paints Arena in Uptown. After the march dispersed, a small number of people remained and reportedly smashed windows, looted, and clashed with police.


Immediately afterward, both Peduto and Pittsburgh Police Chief Scott Schubert deflected blame from the marchers, with Schubert reportedly saying that the "peaceful protest" was "hijacked by a small group who brought youths into the group. White males dressed in anarchist attire."


“It will become crystal clear the young Black leadership that put together that march yesterday, where several thousand people gathered in peace with broken hearts in order to be able to come together as one and say, 'We will not take this anymore,'” said Peduto, “were not the people behind the violence that we saw happening throughout the city yesterday.”

8 People Arrested At Protest At Diamond Park In...

Pier 1 Is Officially Going Out Of Business,...